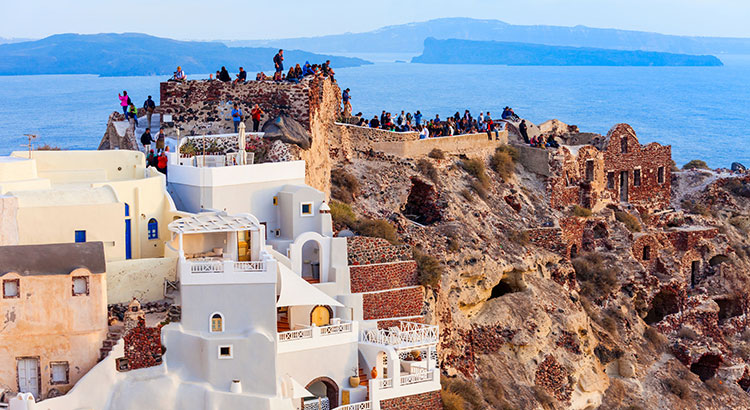 Santorini is full of history, from its famous caldera to the traditional cycladic architecture that fills the island to its many archaeological sites and grand churches. But perhaps some of the most exciting examples of Santorini Island’s richly preserved history is in the many castles that still stand there. They represent different periods of time and sometimes even different cultures but all play a role in the sprawling story of Santorini, Greece.

They’re also awe-inspiring sights that visitors won’t want to leave without seeing. Here are a few to single out during your Santorini island vacation.

Pyrgos as a village does not receive as much tourist traffic as villages like Fira and Oia, Santorini. This is because it’s further inland and not on the main bus lines, but it’s worth it for panoramic views of the island and, of course, it’s castle. To reach the castle of Pyrgos, you’ll likely have to rent a car or an ATV. Not only is Pyrgos inland, but it’s at an elevated position, and no part of the village more than the castle.

The castle itself is a medieval structure that was built to protect and fortify Pyrgos. Thus it’s not the typical image of a tall, towering castle so much as an imposing walled structure. Near the castle walls are two churches from the 10th century. There’s also a temple dedicated to the Virgin Mary inside the castle walls dating back to the 17th century.

The service of Lamentations is held there every year on Good Friday. The castle has seen many additions over the years, but its original history is well-preserved, though not untouched. An earthquake in 1956 severely damaged many of the structures within the castle. Still, what stands is impressive, and the village of Pyrgos provides a charming visit. 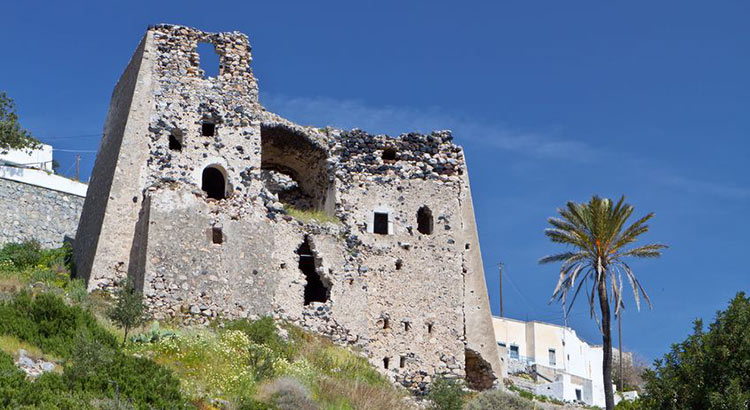 After you trek out to Pyrgos, you won’t be far from Emporio, so make sure to check out the castle there. This castle is more the kind of castle you might expect, including a tall Venetian tower from 1400. This tower stands at the western edge of the castle and despite the fact that it’s stood for 700 years, it always looks like it’s precariously positioned to fall into the sea at any moment. There are also two massive goulas connected to the castle by a tunnel.

This is one of the best preserved castles in Santorini, Greece. It’s rumored to have been built by the same monks who built the Monastery of St. John the Theologian in Patmos. Inside the castle is a chapel dedicated to the martyr Christodoulos, who founded the abbey at Patmos. 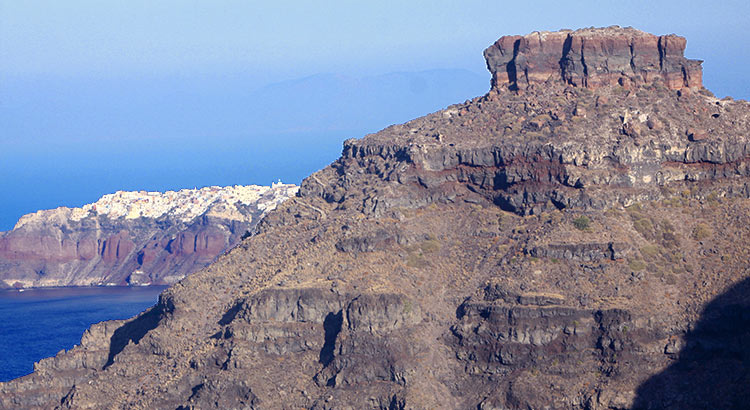 The fortress atop Skaros Rock was once a full medieval city situated just so protect itself from pirates and invaders. Due to earthquakes and erosion over the years, not much of the original structure still stands except for a small Chapel of Agios Ioannis Apokefalistheis. The city has been abandoned for at least 300 years, but the few ruins that remain are worth seeing and remembering.

Despite being the least preserved, the fortress at Skaros Rock is probably the most famous, important castle in Santorini’s history. It’s a frequent hiking destination and can be reached from a trail beginning in the village of Imerovigli.

Castle of Agios Nikolaos in Oia

Many of these castles are valued for their historical significance, and the Castle of Agios Nikolaos in Oia certainly isn’t lacking in history. It was built, after all, in the 1400s to be inhabited by descendants of a Byzantine emperor. It was captured by Turkish invaders in the 1500s, provided refuge against pirates, and provided a home for Catholic churches and important nobles.

But it is not the historical significance of the Castle of Agios Nikolaos that drives so many tourists to it: it’s the sunset. Santorini island is known for one of the most beautiful sunsets in the world, and the best place to watch it is none other than this castle in Oia, Santorini. It’s an easy hike from the village of Oia, but you’ll want to arrive early to beat the crowds. Thousands of tourists will pack in by the time the sun is ready to set. Still, the view is unlike anything you’ll ever see again, so it’s more than worth the crowds.

Although pirates are never a threat to the coasts of Santorini island, these castles are still important sites to tourists, locals, and history enthusiasts. If you want to enjoy the rich history of Santorini, Greece, you can’t miss these castles. And when searching for hotels, Oia Santorini hotels are the way to go.

There are a number of shops, cafes, and tavernas to enjoy in Oia, and a terrific view of the caldera. Book an Oia hotel like Strogili Traditional Houses, with apartments and studios that offer you all the privacy and stunning views you could hope for in your Santorini, Greece vacation.

But don’t spend all day in your apartment. Grab your camera and head out to see these castles!

Beauty and Mystery Can Be Found in the Santorini Caldera

A Taste of Santorini

The Vibrant Villages of Santorini, Greece (Part I)