The 10 Best Churches in Santorini, Greece 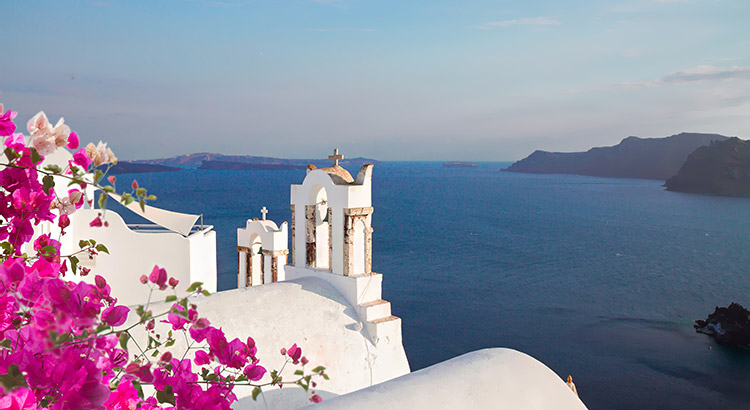 If you’ve started a sightseeing list for your holiday in Santorini, it probably includes visiting some of the churches of Santorini. If not, it should. Santorini is full of stately churches that have stood for centuries, from various eras. Some are constructed with the traditional Cycladic architectural style that you will see all over the island: whitewashed, smooth, with bright blue domes. Others have German and French influences. Each of these churches has a story of its own and plays into the story of Santorini. 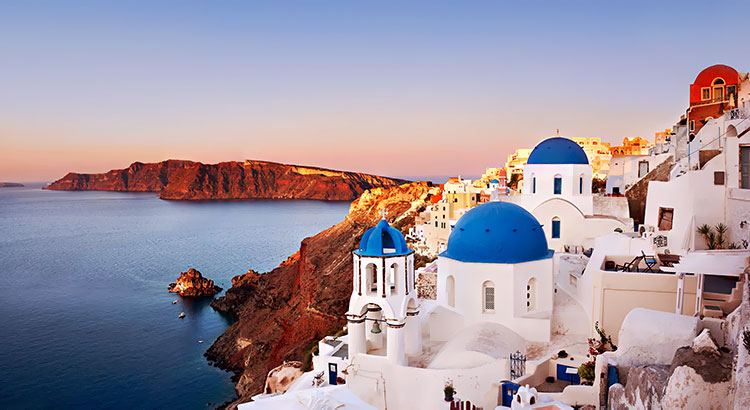 But with so many Santorini churches and a limited time to see them, you’ll need to prioritize. Here are the 10 churches in Santorini that you can’t miss.

If you’re looking for a church with an interesting history, Panagia Sergena in Vothonos is certainly a contender. Its names give some insight into its story. Sergena means “the patroller,” as lookouts posted in this church looked out for pirates in the middle ages. But it’s more commonly known as Panagia tis Trypas — church of the hole. The church was carved into volcanic rock 20 meters above ground and hidden to serve as a refuge from pirates. Today, pirates are no longer a threat, and it’s easier to access the church through a gravel walkway and steps. A tranquil view of Santorini will greet you from this perch.

The Catholic Cathedral Church of St. John the Baptist 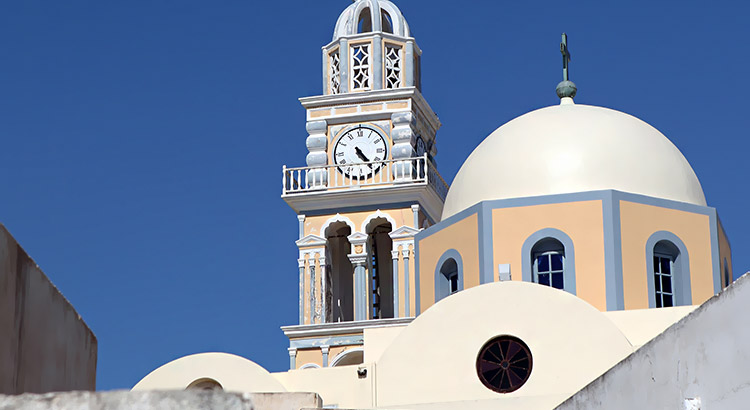 Most of Santorini’s churches have white washed walls in keeping with the Cycladic custom. However, certain structures show the influence of other architectural styles. The Catholic Cathedral of St. John the Baptist is just one of those, with peach coloring and blue molding. It’s built in a stately Baroque style, with a clock tower that sets it apart entirely from its similar churches. It’s located in the heart of a Catholic neighborhood in Fira, Santorini. 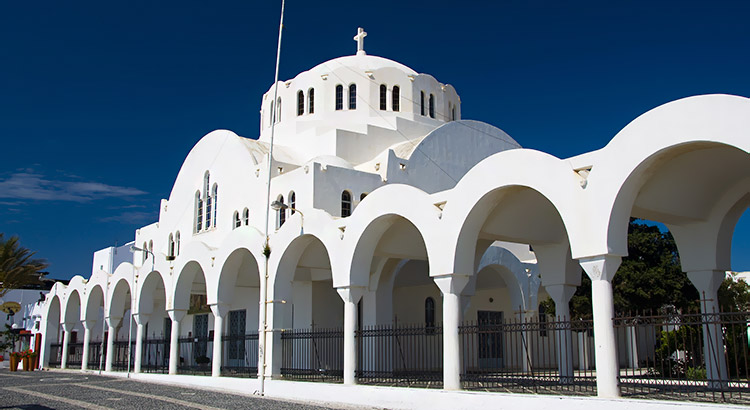 Also located in Fira is the Orthodox Metropolitan Cathedral, which offers something between the two. It’s wide dome, large structure, and rolling arches might help it to seem kindred to the Cathedral of St. John the Baptist, but its white washed walls and frescoes painted by a local artist are wholly Aegean. This church is not only a spectacular view itself, but offers a great view of the Santorini caldera and volcano.

If you ask locals what their favorite church in Santorini is, many will talk about Panagia Matrona in the village of Finikia, Santorini. Panagia Matrona even has an annual festival in its honor every 20th of October, full of live music and delicious food and drink. This church has a tranquil courtyard with a dearly loved palm tree at its center and a famous icon screen where guests often light candles.

Another church known for its icons, Panagia ton Eisodion can be your next stop after a wine tour in Megalochori. There’s also a calendar unlike anything you’ve ever seen, with detailed paintings to portray each day of the year. On the outside, you can’t miss the tall wooden steeple. 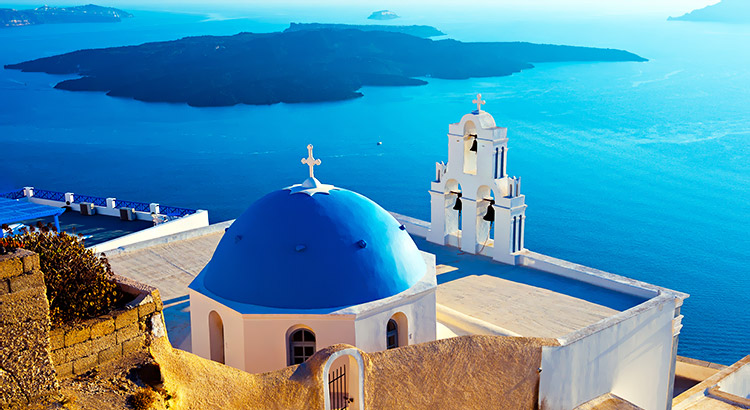 The blue-domed churches in Santorini are famous for their classic Cycladic architecture and the sharp color contrast. Amidst the white washed walls, the deeply blue colored domes offer a surprising pop. There are Santorini blue domes throughout the island, but the beauty and surrounding scenery of St. Gerasimos in Fira has made it one of the most photographed churches in the Aegean. It’s named for a saint of Greek origin himself, Saint Gerasimos, the patron saint of the island of Kefalonia.

6km from the airport in Kamari, you can find Pyrgos and the monastery of Profitis Ilias (Prophet Elias). Square and flat, it may look more like a fort than a church, but its tall steeple helps it to stand out to visitors. This church once served as a Greek school in the 18th century. Today, it holds icons and old manuscripts that can’t be found elsewhere.

Located in Firostefani, Agios Nikolaos Monastery is dedicated to not just one but three saints: Saint Nikolaos, of course; Saint Pantaleon the martyr; and Zoodohos Peghe, or the Virgin Mary. It came to Santorini from Skaros in 1820 and contains a one-of-a-kind Byzantine icon of Saint Nikolaos. 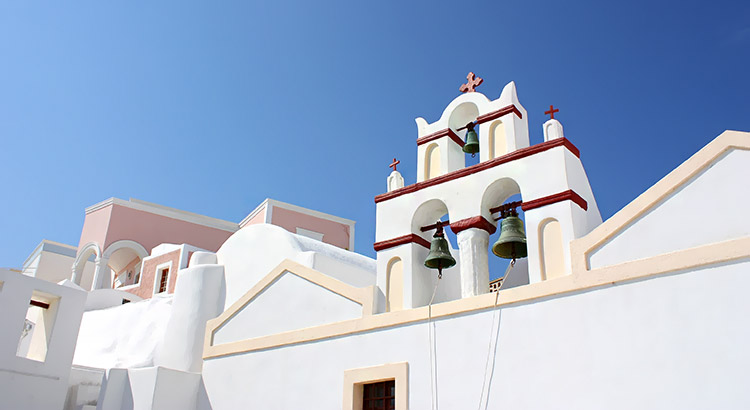 This is another one of the Santorini blue domes, located in Oia, Santorini, Greece. It was once part of Castle Oia, where visitors can now watch the sunset. In the aftermath of an earthquake that destroyed the original structure, the church was rebuilt in the center of Oia, Santorini, Greece, and several celebrations are held there annually. You may even be able to see the dome from your hotel in Oia, Santorini, particularly if you stay at Strogili Traditional Houses.

The last of the Santorini blue domes on this list, Panagia Theokepasti Chapel can be found in Imerovigli. To reach it, climb to the top of Skaros Rock and then back down to the chapel. Many tourists who plan to hike in Santorini even save this church for the end of their Skaros Rock trip, and enjoy the panoramic views that come with the church itself.

While these churches are spread throughout the island, it helps to find Santorini accommodation in one of the larger villages like Oia, Santorini, Greece in order to see the best of them. From Oia, Santorini, you’ll be able to take a bus or boat and reach parts of the island that might be more difficult by staying further iland. [Oia hotels]() also offer splendid views of the caldera, the ocean, and many of the churches themselves. When searching for Oia Santorini hotels, Strogili Traditional houses can offer traditional Greek charm, a family friendly atmosphere, and views that can’t be beat.

Book your room at Strogili in Oia, Santorini today, and when you arrive, ask one of our staff where you should start with your tour of the many Santorini churches.

Why Visit Santorini in Autumn?